Bearings are used to help reduce friction. Metal-upon-metal contact produces large amounts of friction. The friction adds to wear and tear of the metal, producing grinding that slowly degrades the metal. Bearings reduce friction by having the two surfaces roll over each other, reducing the amount of friction produced. They consist of a smooth metal ball or roller that rolls against a smooth inner and outer metal surface. The rollers or balls take the load, allowing the device to spin.

Ball bearings are most common type of bearing and can handle both radial and thrust loads. Ball bearings are also known as deep-groove single-row or Conrad bearings. The inner ring is typically fastened to the rotating shaft and the groove on the outer diameter provides a circular ball raceway. The outer ring is mounted onto the bearing housing. The ball bearings are housed in a race and when the load is applied, it is transmitted from the outer race to the ball and from the ball to the inner race. The raceway grooves have typical curvature radii of 51.5% to 53% of the ball diameter. Smaller curvature raceways can cause high rolling friction due to the tight conformity of the balls and raceways. Higher curvature raceways can shorten fatigue life from increased stress in the smaller ball-race contract area. 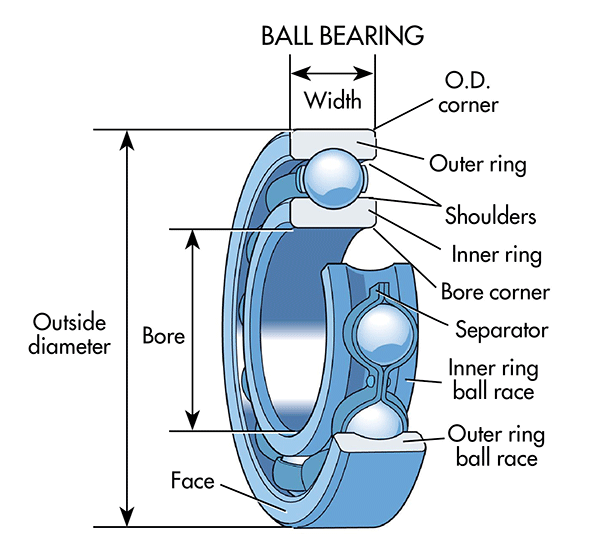 The contact points between the ball and the outer race is very small due to the spherical shape of the bearing. This also helps the ball spin very smoothly. Since the contact point is so small, the bearing can become overloaded at a specific point causing the ball bearing to become deformed. This will ruin the bearing. Ball bearings are typically used in applications where the load is relatively small. 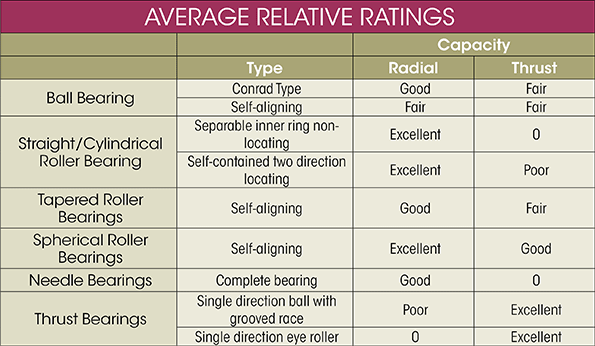 2. The table above lists some general types of ball bearings and their typical load capabilities.

Straight roller or cylindrical bearings run in cylindrical raceways and have low-friction, high-radial load capacity, and high speed capability. Roller bearings are cylinder-shaped bearings where the point of contact between the bearing and the race is a line rather than a point. Load is distributed over a larger area and allows the bearing to handle a greater load. To minimize its tendency to skew, the roller’s length is not much greater than the diameter of the roller. 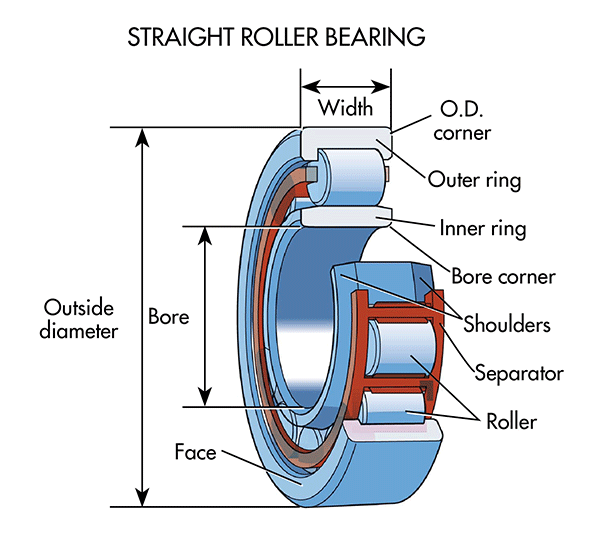 3. Straight or cylindrical roller bearings can be found in applications like conveyor-belt rollers, which are required to hold heavy radial loads.

Their usual design is free to float axially, and they have roller-guiding flanges on both sides of one ring and none on the other side. This allows for the bearing to expand due to thermal activity when used in combination with a ball bearing’s fixed location at the opposite end. A thrust load can be supported in one direction if a guiding flange is added on one of the opposing rings’ side. A second flange can be added for two-directional thrust capacity. 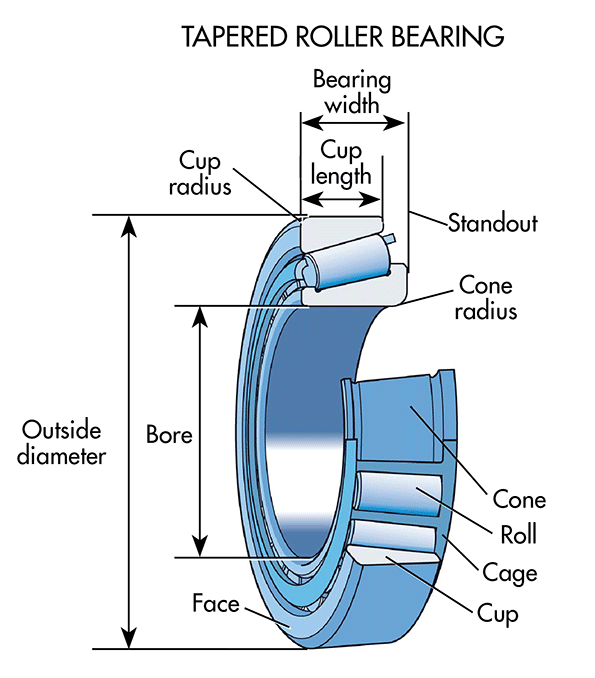 In a tapered roller bearing, the rings and the rollers are tapered in the shape of truncated cones to simultaneously support axial and radial loads. The ratio of the loads depends on the angle of the axes between the roller and bearing. The greater the angle is the greater axial load can be supported. The contact angle for most tapered roller bearings range is between 10 to 16 degrees. For higher thrust-load capacity, a 30-degree contact angle is used. 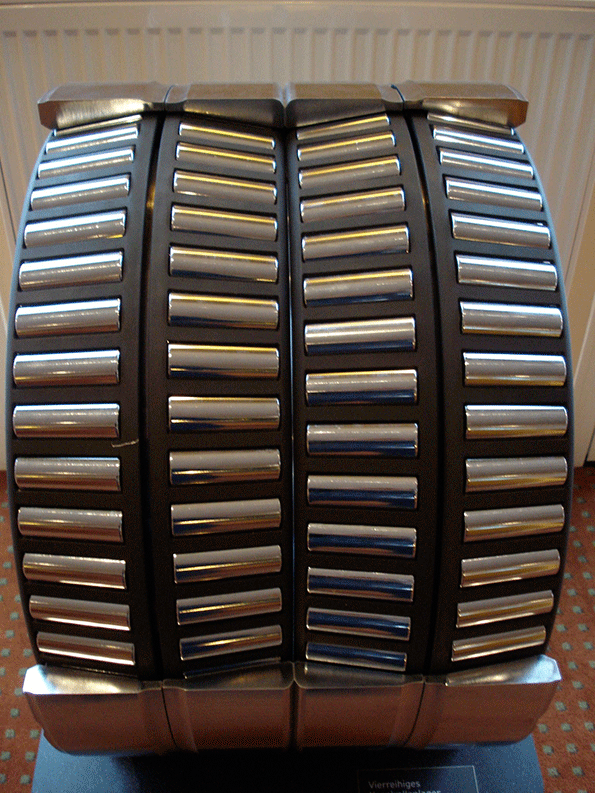 Spherical roller bearings typically consist of two rows of barrel-shaped rollers running in two raceways. One is on the inner ring and the other is on a continuous spherical surface ground on the inner diameter of the outer ring. This allows the bearing to operate with some misalignment. Spherical rollers have barrel profiles that closely match the raceways profiles, hence making them robust and having a high load capacity. They are mounted in pairs inside the bearing housing and are faced in opposite directions. This is done so that the load can be supported in either direction. 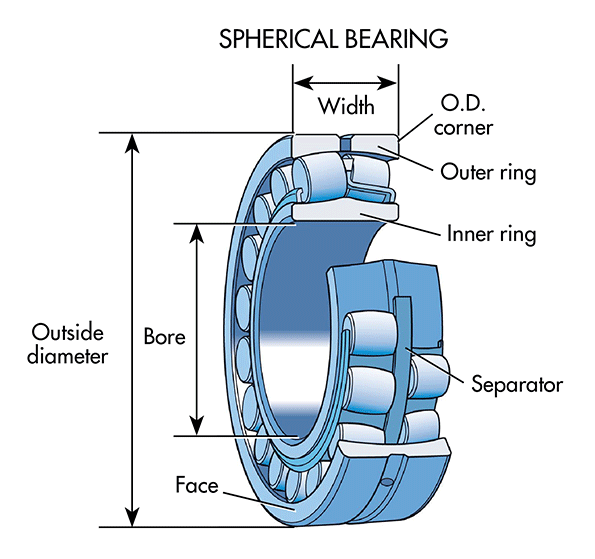 6. Spherical roller bearings are used in car hubs and can support large radial and thrust loads.

Needle roller bearings use elongated cylindrical rolling elements with small diameters. They are used in applications where radial space is limited. The diameter to length ratio for the needles varies between 1-to-2.5 and 1-to-10. Due to their small size, they cannot be guided accurately and generate high amounts of friction. They are used at low speeds and oscillating motions as a result. Cages may be used to help guide the needles and improve retention. 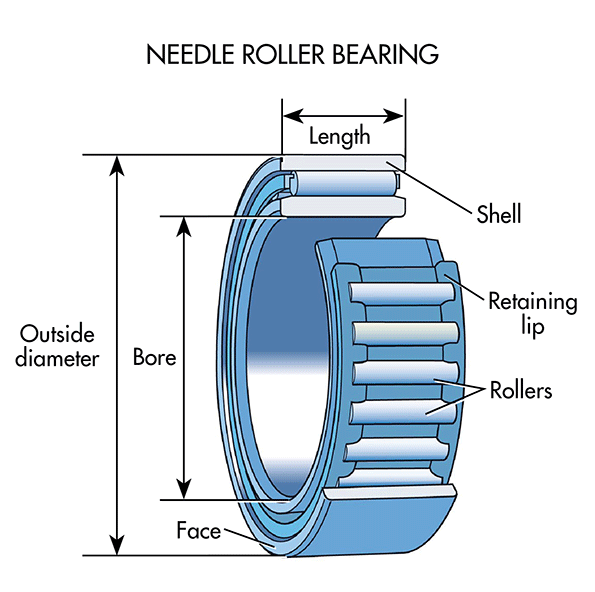 7. Needle roller bearings are used in designs that have heavy space restrictions. 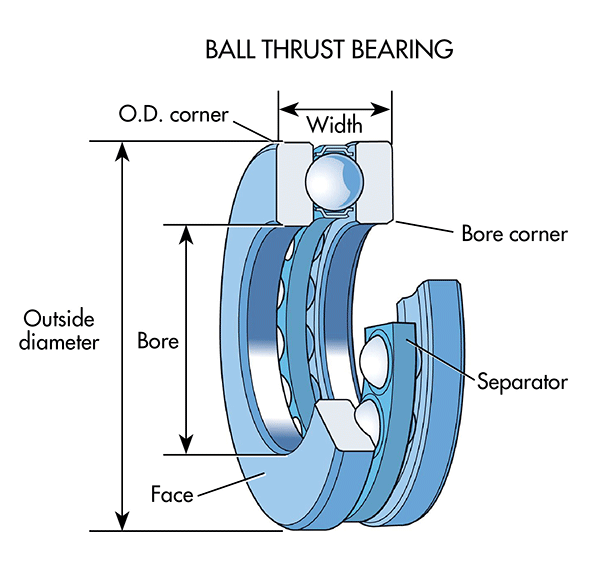 8. Ball-thrust bearings are designed to handle almost exclusively thrust loads in low-speed, low-weight applications. An example of its use would be in bar stools where they are used to support the seat.

All images repurposed from the University of Cambridge.